A Dutch biophysicist, lecturer, therapist and is managing director and founder of the Institute for Applied Biophoton Sciences, Inc. Johan Boswinkel studied economics, medicine, psychology, homeopathy and acupuncture and worked in the banking and travel industries before changing his career path in the early 1980s after discovering the work of the German physicist Fritz Albert Popp and Russian embryologist Alexander Gurwitsch.

Both scientists discovered that cells emit an extremely faint light and that this light directs the body’s biochemical processes. Boswinkel built the first machine to measure and repair the body’s light emissions in 1983. Boswinkel is the founder of the Institute of Applied Biophoton Sciences, which offers biontology training for those interested in becoming therapists. Biophoton therapy is also taught at the Medical University of Graz in Austria.

Boswinkel has been working with biophotons since 1982. He, together with Dr. Schwab of Schwab Technologies, Germany, co-engineered the Chiren measuring instrument.  The Institute of Applied Biophoton Sciences is based in Rotterdam, The Netherlands.

Johan Boswinkel who has been working with biophotons since 1982 founded the Academy in The Netherlands as part of the Health Angel Foundation.

His experiences with over 28.000 patients have made him the worldwide expert in the language of light, or biophotons. He started the Academy to teach others this language. His methods of reading and correcting the light are now being used all over the world. Already hundreds of practitioners are practicing with this exceptional method.

The Academy offers the Biophoton therapy (BPT) training which is part of the Bachelor study Applied Biophoton Health Sciences, as well as a study towards a Masters degree in Integrated Health Sciences. 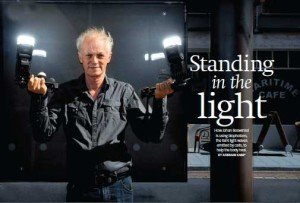 “Standing in the Light” on Johan Boswinkel How Johan Boswinkel is using biophotons, the faint light waves emitted by cells, to help the body heal. Jurriaan Kamp | July/August 2011 issue

Johan Boswinkel founded the Institute of Applied Biophoton Sciences in Rotterdam, Netherlands as part of the Health Angel Foundation. For more information, he may be reached at Biontology.com.